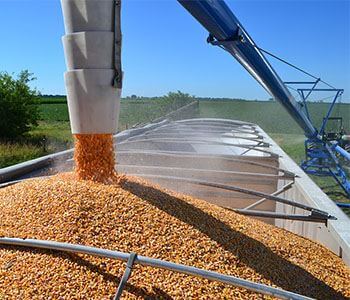 
The heat finally arrived this week as high’s pushed into the 80’s over the last few days as normal high’s sit at the low 70’s. On average, southern MN accumulates about 10 GDU’s per day this time of year. From Sunday-Tuesday, GDU’s reached closer to 25 per day, helping speed up the crop maturity progress.

The long-range forecast for MN predicts southern MN will receive another 150-175 GDU’s in the rest of September, which would be about 50 GDU’s above-average. If your corn is over ½ milk line today, that would mean corn would black layer around October 1.

With a cool and wet planting season followed by periods of heavy rain, moderate temperatures, and a few dry spells, corn experienced a lot of stress. Scouting corn fields and pulling off the lower leaves revealed early signs of stalk rots setting into corn.

Stressed areas of the fields were the easiest to find lesions on the bottom of the stalk, like the one pictured (potentially Anthracnose). It will be important to continue to scout and observe how fast the lesion spread, and how quickly the stalks begin to disintegrate.

The milk line offers a good way to estimate maturity as it signifies the boundary between the liquid and solid starchy areas of the kernels, and the milk line will progress slowly towards the kernel tip as the kernel’s endosperm fills with starch.

The tool delivers a prediction on dry down in order to plan harvest orders based on average weather and maturity date. For example, a field in Mankato that black layer’s on October 7th could be at 22.0% moisture on October 29th. Use the link and click on your location, enter the date you believe your corn will black layer to give an estimate for your own farm.