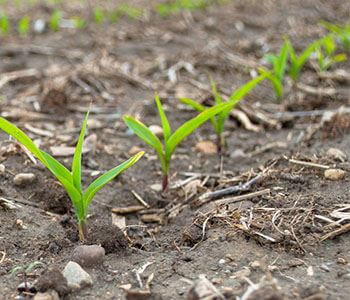 Planting progress varies across the CFS territory, with spots 80%+ done with corn, and some only at 60% or less. 1”-2”+ of rain fell across southern MN last week, pushing many locations over 1” above average rainfall since May 1st, 2019, and a few days behind on GDU’s with the latest cool weather.

Agronomic Considerations for the Week:

Heavy rains caused corn nitrogen deficiencies across the CFS territory in 2018, whether the nitrogen loss was due to leaching or denitrification. With planting delays and wet weather in 2019, nitrogen availability is a critical topic. Saturated soils and excess rain increase the chances of nitrogen loss through 3 different ways:

Denitrification occurs when soils become extremely saturated (water-filled pore space in soils exceeds 60%) and oxygen levels in the soil decrease. A variety of bacteria use the oxygen in nitrate for respiration, and as the oxygen decreases, microbes convert more of the nitrate to N2 gas. N loss of -10% can occur if soil is saturated for 3 days & -10% loss each additional saturated day, equal to the potential of 30% loss in 5 days. This time of the year, denitrification is negligible below 50 °F soil temperatures, but risks do increase with warming soil temperatures.

The good news is that only about 20 pounds of uptake has occurred once corn reaches V8. Nitrogen demand isn’t high early in the season, plus soil temperatures have remained moderate, which delays the conversation of nitrogen to nitrate. 50% of N uptake comes between V10 & R1 and during the V10 to V14 growth stages, corn requires the availability of 7.8 lb. N/day, meaning two-thirds of the total N plant uptake is acquired by VT/R1, with 1/3 left post-VT, so N levels will need to be assessed via nitrate samples shortly to understand levels and sidedressing needs. Highest risk of N loss applications includes fall applications of nitrogen without a stabilizer. The least risky program is a split application of N with a stabilizer in the spring with sidedressing, obviously, with its timing coinciding with the largest N demands. Refer to the table below to understand your N risks dependent on your N fertilizer, and contact your local CFS representative to learn about our NitrateNow nitrogen program that provides fast, accurate, in-season, geo-referenced measurements of soil nitrate.